Every August 12 each year, Uganda joins the rest of the world to commemorate the International Youth Day (IYD). The Day is celebrated to recognize efforts of the world’s youth in enhancing global society. It aims to promote ways in which to engage youth to become more actively involved in making positive contributions to their communities.

ct and brought together development partners, government leaders, community and religious leaders, young people from across the country to showcase and celebrate youth development. To celebrate this date, there were several activities organized, among them; free Hiv/Aids testing, free male circumcision, productive works, a cultural gala by the Ugandan police, and concert with leading artists from Teso sub region.

Although, the international theme for this year was: “Youth civic engagement,” the Government of Uganda chose “We are the investment choices we make: youth matter as the National theme. The choice of the theme was inspired by the importance attached to the young people in the development process according to Mr. Mondo Kyateka, the commissioner for youth and children in the ministry of Gender, labor and social development. “Investment in youth makes social, economic and political sense and is crucial for human capital development and social capital cohesion” said Mondo.

August 12, 1999 was declared as International Youth Day by the UN General Assembly. According to UN statistics, about 18 percent of the world’s population is composed of young people between 15 and 24 years old, more than 200 million of them live in poverty, about 130 million are illiterate, nearly 74 million are unemployed, and some 10 million are living with HIV/AIDS whilst many girls and young women continue to face violence and discrimination.

Uganda has a population of 34.9 million according to the provisional 2014 national census statistics out of which, 78% are below the age of 30 years. According to statistics from the Ministry of Gender, Labor and Social Development, around 400,000 youth are annually released into the job market to compete for about 90,000 available jobs, creating a job deficit of 310,000 annually. Youth unemployment in Uganda stands between 64% and 70% with about 30% of the youths who are institutionally qualified in Uganda unable to find jobs. The situation is even worse for semiskilled and unskilled youths in the informal sector. In spite of government’s remedial response through strategies such as youth grants through agricultural programmes like ‘Entandikwa’, NAADs (National Agricultural Advisory Service) and Youth Livelihood Programme (YLP), youth unemployment challenge continues to loom large.

Among other challenges the youth in Uganda are confronted with include the limited proper functioning mechanisms for youth participation and youth tailored platforms for dialogue, interaction and shared learning. Worse still, limited access to information, opportunities and youth specific empowerment platforms means that young people have limited capabilities and incentive to take active role in development.

During the celebrations, the permanent secretary for the ministry of gender, labour and social development, Pius Bigirimana, said that over 70,000 young men and women have been supported to start up enterprises that can earn them a living through the Youth Livelihood Programme. He also noted that the youth livelihood fund is supporting over 6500 projects since inception and over 38b have been injected in the programme.

Mr. Mondo Kyatekka, the commissioner for youth under the same ministry, expressed great optimism for government to join the rest of the World to commemorate the day. The commissioner reiterated the need to create platforms such the IYD to enable youth to access opportunities, network and share ideas as a means of influencing positive change and development issues for the youth.

While delivering her remarks the UN Resident coordinator a.i, Ms. Esperance Fundira appreciated the central role that young women and men are playing to transform their communities. She said that civically engaged youth are those who participate fully in public life and are capable of making smart investment choices in life. She said that by participating in public life, young people acquire life skills, learn responsibility, are accountable and are able to develop a greater sense of patriotism and confidence needed for meaningful connections with other youth and adults they interact with. “When the youth are viewed as assets and seen as worthy of investment, they become partners in the solution and unleash their potential to contribute to economic growth and prosperity” said Esperance. She also called on the government to expedite the processes of approving the National youth policy and the National Action plan for youth employment which is helpful in guiding youth programming in the country and challenged the youth to take initiative to transform their communities.

On arrival at Katakwi high school, the Vice President after inspected a guard of honor, before the Police Brass band led the crowds to sings of praise to the government for the peace and development in the region. The Vice President then proceeded to tour produce stalls where youth showcased their contribution to society. Here, he was introduced to various artisan works from Katakwi youth. He also agreed that in order to overcome challenges that the youth are faced with, investment in youth is crucial for sustainable. He said that government will embark on a multi sectoral approach for increased investment in agriculture, ICT and industrial sectors to create jobs for young people.

He also said that in order for development to happen with the youthful resources, it is important to understand the needs of Uganda’s youth, the opportunities provided by their ideas and the sources of innovation. “In order for Uganda to realize the full potential of its young people, there is need to work through public-private partnerships”. Ssekandi said he noted that government and the private sector are implementing programmes to improve the livelihood of poor, unemployed youths citing the Youth Livelihood Programme (YLP) and the Youth Venture Capital Fund (YVCP) among other interventions. 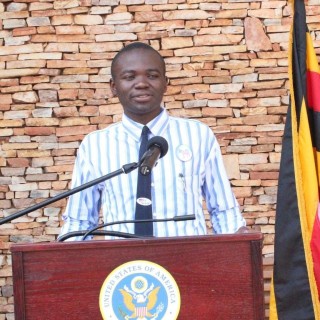